Ngorongoro Crater is the Tanzania premium protected area that is found and managed by Ngorongoro Conservation Authority. The crater is found in Ngorongoro conservation Area which cuts across the highland plains which is covered by open savannah woodlands and Forests. Ngorongoro Crater was established in1959 as conservation Area to protect the unique caldera. The area was declared World heritage site in 1979, the conservation area is the only protected area in Tanzania where humans are allowed to leave together with wildlife at the same area. The multiple used land is being used by the semi-nomadic pastoralist who keep cattle and practice small agriculture. The Maasai people were relocated from the current Serengeti national park in 1951 after declaring the protected area national park.

The crater was named by the local Maasai people who leave in the area after the sound produced by the cowbell that is Ngoro ngoro which they combined to form, one word Ngorongoro. The Conservation Area is the historical site where Dr Leacky discovered the remains of the old stone age man in Olduvai Gorge. The Ngorongoro Crater is part of Serengeti Echo system that runs from the Southern current Serengeti national park to the far North cutting across to the Masai Mara national reserve.

Ngorongoro Crater is the world’s largest broken caldera that is not filled with water. It serves as the world’s biodiversity conservation Area as many threatened wildlife species are inhabited here. The wildebeest migration happens on the Northern part of Ngorongoro Conservation Area in Ndutu Area. This is the largest animal migration on planet with over 2 million animals move and it happens in February to early March when millions of wildebeest come to give birth at Ndutu area.

Ngorongoro conservation Area covers 809.440 hectares of land, the crater is one of the few places where one can see the rare black Rhinos in Tanzania. The small Ngorongoro Crater was voted in February 11th 2013 as seven natural wonders of Africa in Arusha. The crater is reach with wildlife with high concentration of Lions making it one of the area with high Lion percapita ratio in the whole world. 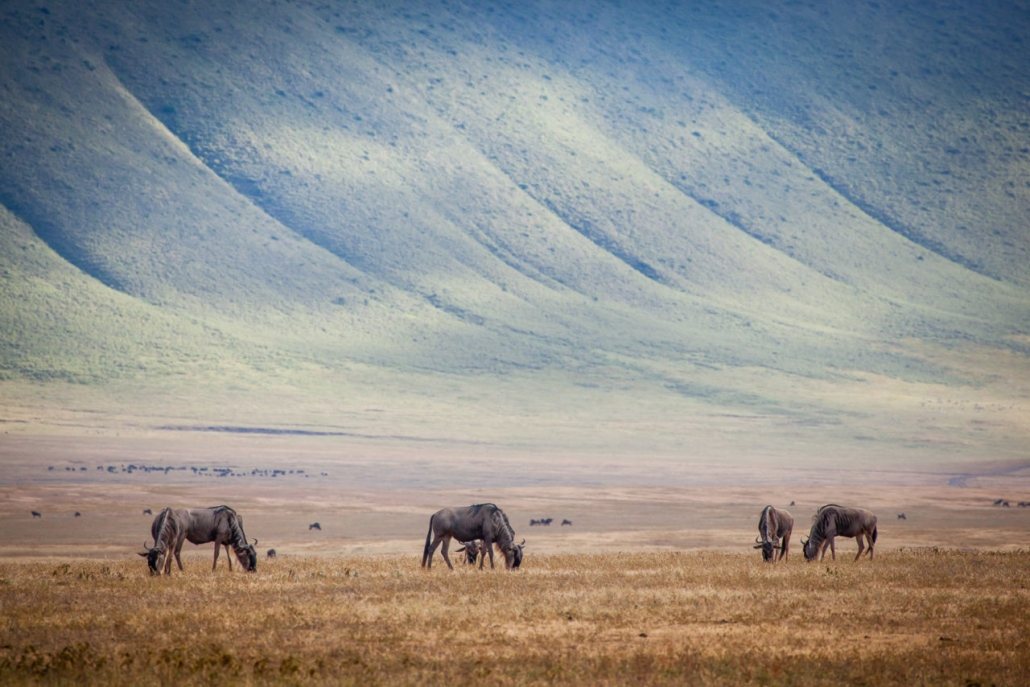 Ngorongoro Crater is an extinct volcanic Caldera located in the Eastern Great Rift Valley in the famous Northern Tourists circuit. The park lies in 120 kilometers west of the tourist town Arusha through the karatu area which is dominated by coffee plantations. The crater is the largest broken caldera in the world measuring 264 square kilometers with dimensions of 16 by 19 kilometers across. Ngorongoro Crater has an elevation of 610 meters and 2,286 meters above the crater floor.

Ngorongoro Crater can be accessed by road through scenic route from Arusha passing through the great Rift Valley region. Dotted with coffee plantations, craft shops around the main road, cultural sites above all the Lake Manyara national park. The road is good tarmac and good taking one around 2 to 3 hours drive. The crater is found in Ngorongoro district in Karatu region with Karatu town being the nearest and the largest town in the area. All the Northern tourist circuit is serviced by one highway that connects, Lake Manyara, Tarangire, Ngorongoro Crater and Serengeti national park. 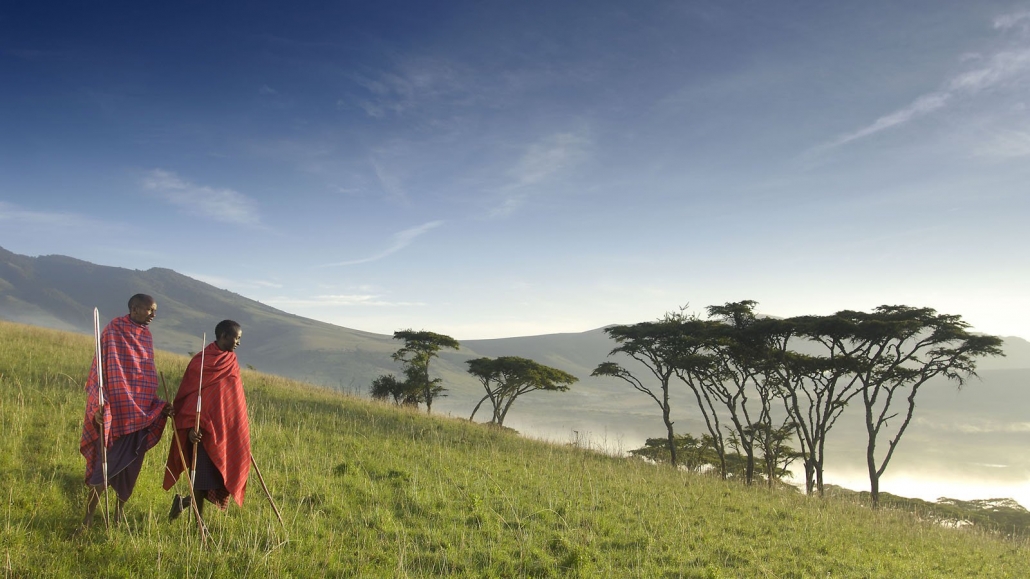 The Ngorongoro Crater is also serviced by the airstrip that is located just next to the Ngorongoro serena lodge a few kilometers away from the crater entry point. There are many domestic airlines that operate daily at the airstrip from Arusha airport and Kilimanjaro international airport. This is suitable for guests who may not prefer to sit to the car for long drive.

Ngorongoro Crater is the little Angel of the entire Ngorongoro conservation Area attractions. It’s the highlights of the conservation Area and entire world. It’s the largest caldera in the entire world which measures 16 by 19 kilometers across, 264 square kilometers by area. The crater has scenic beauty that attracts before one even descends down to the 610 meters to the floor of the crater.  Serviced by Lake Magadi which is permanent lake is a home of wildlife and other tree species that form green forests at the banks of the crater.

The crater was formed when the large volcano exploded and collapsed inside to itself in millions of year ago. The size of the volcano before collapsing was estimated to be the size of Mt Kilimanjaro which ranged between 4500 to 5800 meters above sea level.

This is a small museum that was set by Dr Leaky in the rim of Oldupai Gorge. This is an archeological site where the remains of the old man were discovered by Dr Leakey in 1959. It’s a nice stop place located in the center between Ngorongoro crater Conservation Area and endless plains of Serengeti.

These are the volcanic mountains that were formed under the forces of vulcanicty, some are dormant while some are still Active. The locals have strong attachment to these mountains with their culture as they nick named them the Mountains of gods. The local Maasai people respect these gods. The Mountains are located in the remote areas of Ngorongoro Conservation Area on the North West. This is the remarkable point of the first man with original Maasai locals who still do hunting of lions as the act of initiating one to warrior hood. The locals go to the mountains for worship of different gods especially if the community is tracked by the natural calamities.

The Ngorongoro Crater is a home of all the African big 5 though leopards are rare but occasionally seen.  The crater homes the rare black Rhinos, large prides of lions, leopards, hyenas, jackals, Elephants, zebras, wildebeest, warthogs and many more. However small the crater is but hosts thousands of animals which are permanent residents. The availability of the lake provides water to support the life of the wildlife.

With a wide range of attractions found at Ngorongoro Crater Conservation Area has attributed to many activities that can be done by guests. The crater can be visited in any time of the year with more to enjoy.

Asking yourself what to do while in Ngorongoro Crater, the article gives you detailed information about all the activities that can be done during your safari vacation in Tanzania.

The game drives are done in both inside the crater and in the Ndutu Area. The game drives in the conservation Area are all guided game drives using 4×4 wheel safari cars that have pop up roof. You go closer to the animals especially lions, Elephants, Rhinos, leopards, buffalo, wildebeest, hyenas, warthogs and other. Game drivers in Ngorongoro Crater Conservation Area where their Elands, Giraffes, Gazelles, wildebeest, zebras, Kudu mention but a few. All the gave drives either private or guided game drives are done in accordance with the guidelines of Ngorongoro Crater Conservation Authority.

Ngorongoro Crater is a home of over 500 bird species making birding one of the key activity that can be done in this park. Birding trips are patient experience which takes more days if one has to achieve their long list of birds. The nature silent walk in the bush to approach the birds in their natural habitats. Birding in Ngorongoro crater can be done throughout the year. The best months for birding are the rainy months when the birds are nestling, they can be got in their true colors. There are also migratory birds from North African countries and European states

We will stopover at Olduvai Gorge boasting with a history dating back to the dawn of time. It was here, that the anthropologists Drs. Lois and Mary Leakey discovered the skulls of ‘Nutcracker Man’ and ‘Handy Man’, both very significant links in the chain of human evolution.

Accompanied by the museum, spending some time here learning the history of human evolution is worth it. The museum is located far in the North Western part of Ngorongoro Conservation Area. Its unique experience for researchers and other educative safari.

Having your dream safari in Africa and been wondering where to see all the African big 5, Ngorongoro crater. The combination of both culture and wildlife experience found in Ngorongoro crater is worth a visit.

Want to join the discussion?
Feel free to contribute!